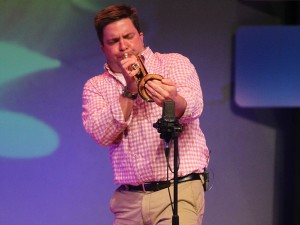 “Have I not commanded you?  Be strong and courageous.  Do not be discouraged, for the Lord your God will be with you wherever you go.” (Joshua 1:9)  This verse is one that we, as a ministry, have always focused on because we know that God will be there wherever we go and whatever we do.

Chiz accepted Christ as his Lord and Savior when he was seven years old.  By then he had been playing the trumpet for three years, having discovered his father’s high school instrument in a closet when he was four.  Since then, he has dedicated himself and his music to Jesus Christ.

At age seven he made his concert debut in his home church in Pennsylvania; national touring began during his last years in high school.  His first recording at age 15, was a custom cd titled, “CHIZ”, soon followed by “COLORS IN BRASS”, his debut on the Myrrh label was “CHIZ RIDER”, followed by “SOLD ON SALVATION”, “TO THE ONE I PRAISE”, “A BIG BAND CHRISTMAS” and “LIVE WORSHIP”. Chiz collaborated with some of America’s most talented instrumentalists to create two albums ‘America’s Choice POWER PRAISE’ and ‘America’s Choice GENTLE WORSHIP’ and now recently he has released his newest solo cd “PSALM 150“.

Ninety per cent self-taught, he began at a young age by imitating songs he heard on the radio.  Now, Chiz’ fresh musical style embodies a jazz/pop sound that has been influenced by such versatile jazz musicians as Wynton and Branford Marsalis, Maynard Ferguson, Louis Armstrong and Jon Faddis.

Chiz Rider Ministries maintain an active national touring schedule of over 260 concerts a year as well as several international performances.

Chiz’ trumpet ministry appeals to a wide age range.  From the heartfelt “Amazing Grace,” which he played at a Billy Graham Crusade, to the high energy contemporary sounds of “SOS”, which he plays at youth concerts, the music and ministry of Chiz Rider is reaching people for Christ.

Having been in ministry for over 37 years, Chiz has been blessed to have performed with such popular Christian artists as Carman, Margaret Becker, DC Talk, Newsboys, Cindy Morgan, Larnell Harris, and Michael W. Smith. He has also performed at a Billy Graham Crusade and numerous times at the Crystal Cathedral.  He has played for several Presidents as well as Congress and performed for the Pennsylvania and West Virginia Special Olympics opening ceremonies.